Cooma, NSW – A Night at the Inn 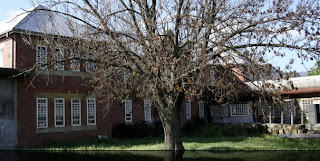 Cooma, NSW – A Night at the Inn
It could have come straight from a horror movie script – a creaky turn-of-the-century hotel, hours of driving rain, two travellers searching for refuge for the night. And for Canberra couple Heidi and Carlos, their accidental destination lived up to the stereotype.
As they pulled into the small town it seemed like any other rural centre, tucked out of sight in the shadow of Brown Mountain, just south of Cooma.
A century of unemployment, a highway bypass and a badly managed de-forestation program had seen the once booming timber town slip into obscurity like so many other NSW country towns.
Except for those who get lost or want a slow trip to the coast, no one ever really stops over in the town with one petrol station, two hotels and four churches.
But while 100 years of neglect had taken its toll on the town's main strip, one hotel stood out for its new paint work and inviting glow – the result of months of painstaking renovation.
The 1880s coach house offered an ideal excuse to suspend the hours of driving in the rain that still lay ahead and indulge in some old fashioned hospitality.
An older couple, new to the hotel game, welcomed the young travellers and showed them to their carefully restored suite, offering them a dinner of roast beef with all the trimmings once they were settled.
There is nothing like a feast to put one to sleep, and it was not long before the weary couple made their excuses and retired to the old four-poster brass bed with its layers of feather doonas and hand-made quilts.
About an hour later, Heidi began to mumble and stir in her sleep. Nothing unusual in that, for she was an habitual talker and on occasion sleep walker, but her partner froze in fear when she suddenly sat bolt upright in dramatic fashion.
There was a slight pause, enough to savour the wind outside and a banging door somewhere. Then she spoke:
"T’was not I who put the noose about his neck,'' Heidi said in a shrill, ringing voice that was clearly not her own.
With that she immediately dropped back from her sitting position and resumed her slumber. When told of her performance upon waking an hour later (her partner unable to sleep) Heidi was disturbed.
Whispering about the odd episode as they huddled together, the couple became aware of stirrings outside their door, scrapings and things being moved in the small loungeroom that adjoined their suite.
Next door where renovations were still taking place they could make out footsteps where there could be none. They knew from an earlier glance through the door that the floors themselves were incomplete and tools lay scattered in the darkness in anticipation of the next day’s work. The owners had retired earlier to their own quarters in a nearby cottage.
The next morning, the couple discussed the previous night's activities and, on overhearing part of the conversation, their hostess interrupted.
"Did you see the ghost?'' she asked inquisitively. She went on to offer an explanation.
Last century the man of the house had murdered his wife in a fit of rage by throwing her down the stairs. He was later hung for the crime, or so they supposed. The couple were buried in the Pioneer’s Cemetery several kilometres down the road.
In a quite matter of fact way, she explained that the ghostly residents quite often visited guests as well as the residents, making noise and appearing from time to time in addition to the regular jangling of kettles and pans in the kitchen.
Maids are forced to walk up the creaky stairways sideways with both hands gripping the left-hand rail on account of invisible hands that would try to push them in the small of the back.
Violent arguments can often be heard emanating from Room 3 despite the fact it often lays vacant. It holds the reputation as "the most haunted room" in the residence.
And no one has ever enjoyed a full night’s sleep in the mysterious room under the stairs with its strange, claustrophobic atmosphere.
A favourite story revolves around the visit of a young Sydney couple and their five-year-old daughter. They had been sleeping for some time when the husband awoke to see the daughter standing in the doorway of his room staring at him.
"Sarah, what are you doing up? Go back to bed," he admonished.
The young girl stood, unmoved by the father’s orders.
"Sarah," he hissed, not wanting to wake his wife, "Go back to bed now before you wake Mummy."
On hearing her name the mother woke, took one look at the doorway and said, "That’s not Sarah!".
The young girl vanished and, with the spell broken, the couple rushed next door only to find their daughter tucked up and asleep in bed. They left quickly the next morning.
It would seem the old coach house is home to more than one ghost, and more than one strange encounter. Would the couple go back again?
"You bet," Heidi said. "But not without company!"
Newer Post Older Post Home