Ghosts of the Old Spot 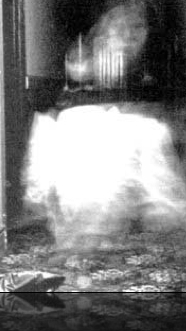 Scott Pearson caught this bizarre
image one night at the Old Gawler
Hotel, near Adelaide, South
Australia. Can you make out the
faces? Spooky!

When Scott Pearson's brother told him his new home was haunted, he laughed it off. But when he saw his brother was serious, the wedding photographer from Happy Valley, South Australia and a friend offered to investigate.
At the time Scott was an avowed sceptic, but after what he experienced that night, he says he's now a firm believer in the spirit world.

"Years ago my brother and his wife and kids moved into the Old Spot Hotel in Gawler, South Australia, a small town north of Adelaide," Scott recalls.
"After carrying out renovations on the building - built in 1836 - strange things started to happen. People started to hear strange things and see the apparition of a small girl and an older man.
"Being a sceptic, I didn't believe it until my brother started to see things as well. All of the stories from different people were the same, so I got interested and, being a photographer, I thought I would have a go at getting something on film."

Scott packed up his Classic Natural Images work bag and, with his friend, decided to stay in the hotel all night. The pair settled down in the section of the building once used as Gawler's morgue last century, before it became a hotel.
As the night wore on nothing seemed to be happening, until Scott's uncanny 'sixth sense' kicked in and he started snapping pictures of the darkened corridor ahead of them.

"It was very eerie. I could feel the presence of the spirits, or what ever you call them. It was so strong a feeling that it is hard to describe.
"I walked through the space and could feel something, like the sort of feeling you get when you¹re moving through a force or energy.

"After developing the film I had a quick look at it and didn't think I had captured anything until a week or so later when I was doing some testing in the dark room and I noticed a negative which looked different from the rest. I made a copy, and could not believe it!
"I just about wet myself when I developed it because at the time you couldn't see anything, but I could feel it. I then took a copy to every photo expert I could find and they all said it was unexplainable."
Newer Post Older Post Home