The truth isn't on there 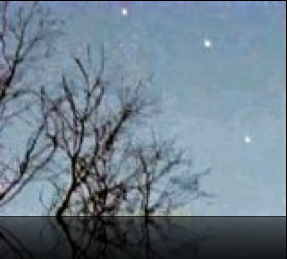 Aliens over Richmond? No, just clever computer-generated special effects purporting to show UFOs in the Hawkesbury.
THIS UFO footage was purportedly shot over Richmond on July 11, 2006.
It's featured on a website along with a raft of other unidentified flying object footage supposedly shot by people all over Australia who, quite handily, were armed with cameras when the extra terrestrials came a'calling.
In reality, however, these stills – and the rest of the footage featured on the website – is part of a sophisticated hoax funded by taxpayers to the tune of $15,000.
Perth filmmaker Christopher Kenworthy, the man behind the short films and website – which will all be included in a documentary on the 'project' and its impact – prefers the term "immersive artwork" or artistic illusion, and convinced the Australian Film Commission that the website would not mislead people.
The taxpayer-funded project has angered Australia's genuine UFO researchers like Bill Chalker, who has expressed surprise that a Federally-funded body would dole out money for a project that deliberately misled people.
Mr Chalker, an industrial chemist who has authored many UFO books and articles, said the funding aspect was hard to stomach.
"The exercise seems to demonstrate a propensity for uncritical belief in things, easily manipulated internet travellers, and inflated claims about the importance of the ‘artwork' – which at its heart was basically a hoax aimed at, at best, seeing how various parties and peoples would respond," he said. "I think I could have told him pretty much what he has found via this bit of ‘performance art' without needing to spend the (public, including a little bit of mine via tax) money."
The AFC granted the filmmaker $15,000 to proceed with the project in April of this year under its ‘experimental digital production' category.
The website – www.australianufowave.com/ – has since attracted millions of viewers from around the world, the bulk of whom have been taken in by the films, which were progressively uploaded over a period of several months. The final two films are obvious fakes.
The Gazette contacted the website's registered Melbourne owner – a fictional person by the name of ‘Allan Stewart' – but he was unable to talk to us as he had, apparently, buckled emotionally under the pressure of dealing with the site's contents and angry UFO researchers.
"Due to intense and unexpected pressures I am taking a (possibly permanent) break from UFOlogy and will not be reading or answering email," the message on the website reads. "I am not going to accept any more tapes or clips, so if you are a UFO witness, please contact a reputable site, such as www.hbccufo.org."
Correspondence with subsequent website ‘caretakers', ‘Tim' and ‘Des', furthered the hoax.
The deception was finally revealed on the website.
"We had three main aims: To give people a taste of the drama and excitement of a UFO Close Encounter, creating a genuine sense of wonder; to improve research into videos of genuine UFOs. As we discovered, researchers are woefully equipped to spot fakes," the website reads.
"We want ufology to improve as a result of this experiment; to show skeptics that they often rely on faith rather than evidence." (Many skeptics made bold statments about the clips being nothing more than balloons, space junk, stars etc – without doing their research. They were more easily misled than UFO-believers.)