The Yowiehunters
Mike Williams talks to author Tony Healy about his newly released book, co-authored with Paul Cropper - The Yowie: In Search of Australia's Bigfoot.
How did you first become interested in the yowie?
In 1975, when I read a newspaper article about Rex Gilroy and his research. Ironically, at that time I was working two jobs, saving for a two-year expedition during which I would search for sasquatches and yetis in North America and the Himalayas. Naturally, the suggestion that we might have similar creatures here in Australia was very difficult to accept.
I met Rex shortly thereafter, but as he offered very little documentation to back his claims, I remained sceptical. A few weeks later, however, I learned of some Aboriginal yowie lore from the NSW south coast and also of a “gorilla” that was reportedly seen in the Tinderry Mountains in the late 1800s. In 1976 I interviewed an old bloke, Rodney Knowles, who’d found huge five-toed tracks in a place called Yahoo Valley in the 1940s. Even so, I didn’t begin to take the yowie phenomenon entirely seriously until Graham Joyner published his booklet, The Hairy Man of South Eastern Australia in 1977, which contained 26 well-documented references to ape-like creatures seen in Australia during the colonial and early modern eras.
So my own yowie research dates from about 1976.
What is it that you find most intriguing about the yowie, above all other Fortean interests?
I guess it’s because there is such a large amount of traditional – and contemporary -Aboriginal lore that relates to the hairy giants, because British settlers reported seeing similar creatures throughout the colonial era and because people continue to report similar hair-raising encounters.  Some of the eyewitnesses in our files are highly trained observers, such as rangers, surveyors and soldiers – including members of the SAS.  It’s difficult to think of another Australian mystery that’s so well documented.
Most of all, I think, I’m attracted to the yowie phenomenon because it’s just so outrageous. The very notion that there could be hundreds of huge, hulking, drooling ape-men lurking out there in the scrub, watching bemusedly as the rest of us blunder through our daily pursuits, has always struck me as very funny. 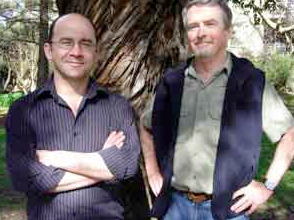 Authors Paul Cropper and Tony Healy
What would you rate as your best yowie report yet?
It’s hard to decide. One very good one involved Mrs Jean Maloney at Woodenbong, NSW, in August 1977 (Case 111 in our book). Mrs Maloney was within six feet of the towering, ape-like creature as it clutched her screaming dog to its chest. It was brightly illuminated by a 200-watt yard light. Her husband and a neighbour both heard the dog’s screams and the yowie’s loud, grunting vocalisations. After its ordeal, Mrs Maloney’s dog was bleeding from several wounds and covered with a greasy, waxy substance that stank to high heaven. The poor creature never fully recovered its health, and died soon afterwards.
Three large, distinct footprints were found and one was photographed by Gary Buchanan of the Lismore Northern Star. Ten months earlier, two other yowies had been seen, again in good light and at close range, in a neighbouring yard, by Mrs Thelma Crewe.
What would you rate as your best evidence?
Some of the footprints are pretty interesting, because in a couple of cases prints from widely separated areas are so similar in shape that it seems very likely they were made by the same type of creature. Two footprints in particular – one cast by Dean Harrison near Kilkiven, Queensland, in 2001, and another cast by Andre Clayden at Springbrook, 250 km to the south, in 1998, are strikingly similar.
The apparent “yowie nests” found by Paul Compton near Glen Innes and by Major Les Hiddens near the Russell River in far north Queensland also constitute pretty impressive evidence.
Where’s Australia’s best “hot spot”?
Several areas, such as the far south coast of NSW, the Kempsey area and the Gold Coast hinterland have produced a heck of a lot of reports from the colonial era down to the present, but most yowie researchers like to think of the Blue Mountains, just west of Sydney, as being “Yowie Central”.
Have you had any hairy encounters of your own?
No – although I’ve examined a couple of likely looking footprints and searched many areas where yowies have been seen – sometimes just before I arrived or just after I left – I’ve never seen hide nor hair of them. Sometimes I joke that the old Nikon camera I always carry must have some strange yowie-repellent effect!
Oh yes – while yeti hunting in Nepal I heard some pretty hair-raising vocalisations – but I guess that’s another story … 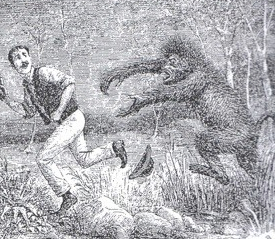 An illustration from an 1895 book describing the
killing of a huge bipedal 'wood devil' in north QLD.
What are the parallels with the American bigfoot?
Strange as it may seem, although there are some differences, eyewitness descriptions of the yowie and the bigfoot – and their observed behaviour – are so remarkably similar that it is tempting to assume they are very closely related. We devote quite a few pages of the book to a comparison of the two mysteries.
What do you think about the “hobbit” (Homo floresiensis) remains recently discovered on the island of Flores? Could there be a physical basis to the yowie?
The discovery of the H. floresiensis skeletons was really interesting in lots of ways. The head of the team that discovered them, Mike Morwood, suggests that the “hobbits” were descended from the much larger Homo erectus, which arrived on Flores over 800,000 years ago. Just as elephants that reached Flores gradually shrunk to the size of cows, the suggestion is that H. erectus gradually shrank because of the peculiar island environment.
Aborigines (and non-Aboriginal eyewitnesses) tell of encounters, in Australia, with big hairy ape-men (yowies) and very small ape-men (junjudees). We devote an entire chapter in our new book to the junjudee “littlefoot” phenomenon.
If Mike Morwood is right, what happened on Flores might – just possibly - explain both the yowie and the junjudee mysteries. Maybe some Homo erectus just passed through Flores before blundering on towards Australia (possibly swept along on rafts of tangled debris like some of the survivors of the 2004 Indonesian  tsunami). Others may have remained on the island for hundreds of thousands of years, shrinking to hobbit size, before following H. erectus to Australia. So then, much later – about 50, 000 BC – the ancestors of modern Aborigines would have arrived to find (just as a couple of Aboriginal legends suggest) the continent already inhabited by both “the big fellas” (yowies) and “the little fellas” (junjudees). 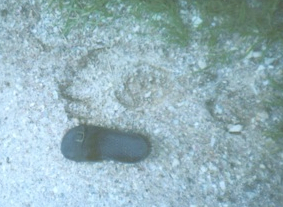 A huge footprint found near Canungra Creek, Qld, in February 2001

What are your stances on the alleged paranormal nature of the yowie?
Ninty per cent or more of eyewitnesses are convinced that the creatures they encounter are real, flesh and blood animals and I hope they’re right. On the other hand, a lot of Aboriginal yowie lore smacks of the supernatural. It can’t be denied, either, that the testimony of some eyewitnesses contains extremely weird elements that hint at the paranormal.
I’m much more inclined to entertain the “paranormal theory” than Paul, who has never been particularly comfortable with it. We agree to disagree on this aspect of the phenomenon. In the book we discuss the paranormal along with several other more conventional theories (such as their possible relationship to Homo erectus) and let readers make up their own minds as to the yowies’ origin.
Is this it? Have you finally closed the chapter on the yowie?
We’ve been working on this book for more than seven years, and I sometimes feel I never want to hear the word “yowie” again! But as soon as I hear of another good sighting the old adrenalin rush returns. I guess Paul and me will always be involved in yowie research, but from now on, I reckon, we won’t feel the need to stay abreast of absolutely everything that’s happening. That would be impossible now, anyhow. Thanks to Dean Harrison and to the many other very effective younger researchers who are now involved, there are simply too many reports and other developments to keep track of.
What will your next book be about?
Paul and I are thinking of hooking up with a couple of crazy Forteans from the Blue Mountains (do the names Mike Williams and Ruby Lang ring any bells?) to put together a book about Australian mysteries in general: UFOs, ghosts, polts, Min Mins, fish falls, bleeding statues, sea serpents, bunyips, Tassie tigers, alien big cats - plus a few yowie stories, I suppose, (you can’t get away from the buggers entirely!). 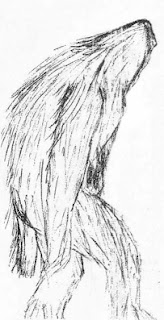