Tiger Hunt Doomed From The Start 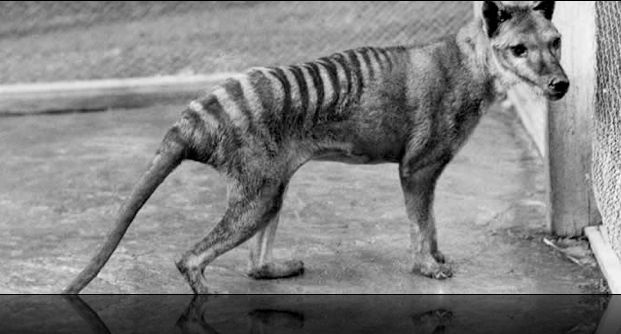 Reward for Tiger Encourages Futile Safari Hunts
By Ruby Lang - This opinion piece featured in the now defunct Phenomena Magazine
THE $1.25 million reward for proof that the Tasmanian Tiger (Thylacinus Cynocephalu) still roams the forests of Tasmania is about as unachievable as arch skeptic and magician James Randi’s $1 million for proof of the paranormal.
Reading the fine print, it’s clear that the rich prize, put up by The Bulletin, a magazine owned by Australia’s richest man, Kerry Packer, will never be paid out under the ridiculously stringent conditions listed by the publication.
It is not just a case of snapping photos or endeavouring to collect spoor, scat and hair – methods already being employed by the more seasoned tiger hunters and self-appointed cryptozoologists (experts in hidden/rare/extinct/fabled animals). The Bulletin’s tight list of requirements reads more like a scientist’s wish list: one live specimen, two clear photographs, two lots of videotaped footage and a signed statuary declaration from a qualified veterinarian (never mind that thylacine physiology isn’t taught in veterinary schools) who has seen the creature firsthand and is satisfied that it is a genuine member of the species. And then there’s that deadline. Punters have until June 2005 to cough up the goods.
Fail to fulfill just one of the criteria and you forfeit the money, honey.
Hurdle number one, the capture of a live specimen of the thylacine - long thought to be extinct since the last animal died in captivity in 1936 – would be hard enough. However, it seems it will be next to impossible considering traps would need to be laid within national park areas, an act that requires a permit.
The Tasmanian state government, caught unawares by the competition, has already come out swinging, refusing to issue permits to would-be tiger hunters. Tasmanian emergency services are now steeling themselves for an influx of ill-prepared adventurers unfamiliar with the wilds of the island state, which boasts some of Australia’s most rugged bushland, or one of its most prolific residents, the venomous tiger snake.
Hurdle number two involves procuring two clear photographs showing the thylacine in all its glory.
Seasoned wildlife photographers could probably commiserate here – capturing photographs of a rare animal can take some professionals months, even years.
For those who have been following the news of late, a German tourist allegedly snapped two such pictures, albeit quite blurry, of what museum officials believe to be the creature. Conveniently, however, they have not yet made it to print. A more cynical soul might suggest that the photo stunt and the recently announced competition might be linked… more likely, however, is that this is where The Bulletin drew its inspiration for its competition.
One man who sighted the tourist’s photos, Tasmanian biologist Nick Mooney, is convinced of their veracity. They show, he says, a flesh and blood thylacine.
Considering that, up until the photos of the German tourist were sighted, no one has ever snapped the elusive thylacine in the wild alive – it’s a famously nervy creature that rarely survived capture and failed to thrive in captivity – the chances of snapping a single frame within the tight three-month window seem remote.
Despite the lack of physical proof, more than 4000 sightings have been logged of the supposedly extinct creature in both Tasmania and areas of mainland Australia, pointing to the very real possibility that the thylacine still lives.
Tony Healy, co-author of Out Of The Shadows, a book dedicated to Australian mystery animals such as the thylacine, has dismissed the competition as an unfortunate stunt.
“At worst, this ill-considered publicity stunt will cause a thylacine to die in a trap somewhere out in the scrub,” he said.
“While the chances of that happening are remote, it is quite likely that the reward offer will result in many other native animals, like devils and wallabies, dying miserable deaths in snares.”
Tasmanian Greens environment spokesman, Nick McKim, agrees, referring to the reward as a “modern day bounty” that could threaten the existence of any surviving thylacines.
“In the event that a thylacine is found...we will have a private sector media organisation making crucial decisions which may impact on its survival, which is a recipe for potential disaster,” Mr McKim said.
The nature of the competition has horrified conservationists, but found an unlikely supporter in former Australian Museum director Mike Archer, one of the key supporters of the thylacine-cloning project, which was recently discontinued.
Archer will most likely participate in a panel that will judge the entries, if there are indeed any, in The Bulletin competition. The reward has also inspired a copycat – an offer of $1.75 million for evidence of the tiger, offered by Tasmania tourism operator Stewart Malcolm.
Considering the facts, it’s not difficult to see that the Sydney-sponsored tiger hunt is nothing more than an ill-conceived publicity stunt for a magazine that, while it has endured for 125 years, has certainly seen better days circulation-wise.
While editor Gary Linnell denies the whole thing has been cooked up to boost sales, he can’t deny that the idea has generated a truckload of publicity. You can’t buy that kind of advertising.

"The reward is open until June 30. It’s a pretty safe bet that if a tiger is not found by then, we’ll know the truth is just a myth," Linnell trumpeted in the magazine's March 29,2005 issue. Sure Gary, we put our faith in you (not).
We can only hope that if the tiger is still eeking out an existence in Tasmania’s ever-shrinking wilderness, it manages to avoid the greedy treasure seekers and publicity hounds to survive and thrive.

Postscript: The Tiger "hunt" was a bust and the magazine smugly declared the Tasmanian Tiger "dead" and very much extinct. They also had the cheek to have a go at the Tasmanian tourist company that mirrored The Bulletin with its own reward for proof of the Tiger. Linnell labelled it a "cheap publicity stunt". You don't say Gary, you don't say...
Newer Post Older Post Home