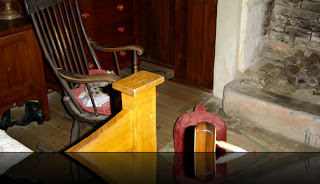 UK - The Haunted Chair
Not long after the end of World War II Angus’ mother, who was originally from the UK, left her Australian family temporarily to stay with her sister and her three small children to help comfort her after the recent death of her husband.
"My Aunt’s husband, a veteran from the war, had a serious lung disease believed to have been picked up as a result of his military service. Prior to his death he would regularly sit in his rocking chair in an upstairs room on his own.
"Each evening the two women would hear the children playing in their rooms after they had been sent to bed - a bit of fun and games and what have you - but there would always be this sound coming from Stan’s old sitting room.
"Both women would blame the noise on boisterous children avoiding bedtime and getting up to mischief, and so one evening they crept up the stairs to investigate and surprise the naughty culprits.
"As they reached the landing they could hear sounds coming from Stan’s old sitting room, what sounded like feet shuffling and the rocking chair creaking as it was rocked gently to and fro. Opening the door to the otherwise unused room, the two women were shocked to find the chair rocking – and continuing to rock while they stood by and watched.
Angus recalls his Mother’s absolute certainty that there were no windows or doors open; no wind that could have started or sustained the movement.
"This occurred a number of times at a particular time of night, after the children were in bed, and the women speculated that it was the protective spirit of Stan coming back to watch over his children.
"After some time the rocking chair actually broke, fell apart, as if it had been used too much. My Aunt now attributes the chair incident as proof that her husband had come back after death to watch over his family."
Newer Post Older Post Home