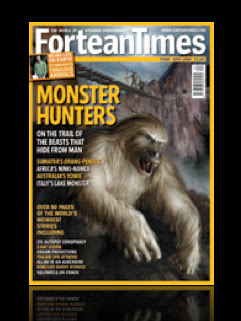 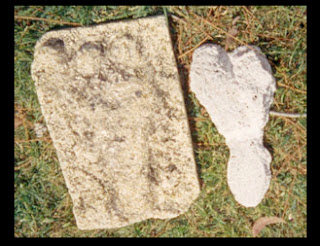 "The Aborigines told me that they live in the trees, but I think that’s just an illusion that they have. In fact what I think they meant is that they just stand behind trees," Neil says. There was also an Aboriginal story that Yowies have their feet on backwards. I don’t believe that they do; I think what they meant, in my interpretation, is that they’re just f***ing hard to track!"  The reference to backward feet is a common one in faerie lore, and regularly crops up in Bigfoot/yeti stories from around the world. It also lends the creature a somewhat otherworldly air. But ask Neil his opinion of the phenomenon and he’s adamant: "It’s definitely a real creature. I don’t buy into any of this paranormal stuff."
One researcher who does favour a possible paranormal explanation is veteran Australian 'monster hunter’ Tony Healy. Healy, who along with colleague Paul Cropper 1 is working on what will be the most comprehensive book ever written on the subject of the Yowie, believes some accounts point to the creature "being something other than an anthropological or zoological mystery – that is, something other than flesh and blood. If we reject everything about the Yowie that smacks of the paranormal we’d have to sweep 20 per cent of the accumulated data under the carpet," Healy told the Sydney 2001 Myths and Monsters cryptzoology conference. 2  "After 25 years on the trail, I really suspect that the American Indians, the Australian Aborigines and some of the whacked-out American researchers are right: that is, that we’re dealing with shape-shifting phantoms here that will probably remain beyond human comprehension."  How else to explain the vanishing acts, glowing red eyes (in one encounter described as "the size of tennis balls"), superhuman feats of speed and the ability to invoke the so-called "nameless dread" – the inexplicable primal fear that "turns your guts to water" – experienced by so many witnesses?  "The dread", as some self-styled Yowie hunters refer to it, has stopped many individuals in their tracks and inspired a hasty retreat to the safety of cars and civilisation. It’s not unlike the sort of temporary, terrifying paralysis that strikes the prey of big cats. What kind of creature could engender that kind of fear?  Two people who firmly believe that the Yowie has a paranormal origin are Jerry and Sue O’Connor, neighbours of Neil and Ian.  They favour the term "nature spirit", and given some of the paranormal attributes outlined thus far, they may yet be closest to the mark in truly describing the mysterious creature.  Their first encounter with the Yowie was in November 1999. Sue was out on the couple’s back veranda late one night when the silence was broken by a spine-tingling scream.
"It was about midnight and I was just doing some painting, when suddenly there was this sound," she tells us. I don’t know what it sounded like – like something out of this world, like a cross between a lion, a bear and a monkey. It sort of growled-roared. It freaked me out; it sent shivers up my spine. So I ran inside and called for Jerry."  Initially sceptical of his wife’s claims, Jerry walked out to the back veranda, explaining to Sue as he went that the noise – it being springtime – was probably just wallabies or wombats making mating sounds.  "Then this thing absolutely roared," Jerry recalls. "It was alien, and it sounded like nothing I’ve ever heard in my life. We didn’t have a torch so we couldn’t really see anything. But the feeling that came from it was like a physical barrier, like I was a threat to it. This wall of fear hit me and the hair stood up on my arms and the back of my neck. I just dragged Sue inside and shut the door. There was nothing that I was taught about in the Aussie bush that sounded like this. I never wanted to hear anything like it again, it was that frightening."  The couple, both in ill health, had moved to the area two years prior "for a quieter life" following Jerry’s discharge from the Navy. But that encounter shattered more than the peace and quiet of one evening – like a ripple effect in a pond, it was the start of something much bigger.
Myth to Reality

"I thought that Yowies were just something we had invented because the Americans had Bigfoot," says Jerry. "That incident was the first inkling we had that there was something bizarre living in the bush around here."

Like Neil and Ian’s experience, the O’Connors’ encounter set the scene for a number of bizarre incidents around their home, leading them to become reluctant witnesses to a creature they had once relegated to story books.
Not knowing Neil at the time, the O’Connors got in touch with Queensland-based Dean Harrison, who runs Australian Hominid Research, a group dedicated to researching the Yowie phenomenon. 3 Dean put the pair in touch with Ian and Neil, who lived just streets away, as well as passing on the story of a third man who had spotted something large, hairy and hominid on a road near the O’Connors’ home – on the very same night they had experienced the spine-tingling roar.  "This bloke Brad Croft was driving along the road, which is about 500m [1,600ft] away from our house, when he saw this large, 8–9ft [2.4–2.7m] hairy man cross the road and go down into the gully," Jerry says. "He drove straight home and got Neil, who lived in the same street as him, and within 10 minutes they were back at the spot walking around. As they got down near the creek they heard it crashing around and running up a track, which, as it turns out, led straight to our backyard."  On another occasion soon afterwards, Sue was sleeping on her bed with several of her six cats when she was woken up by the sound of their collective growling: "Their hackles were up. I looked up to see why they were growling, what they were looking at, and just caught a flash of a shape in the window, about eight feet tall."  Prior to that, the couple had regularly been woken up at night by the sound of their external fuse box cover being opened, and banging on the side of the house.  "The fuse box door would slam, but there were no kids living in the area at the time, and hardly any neighbours," Jerry recalls. "We thought that it might have been yobbos [pranksters], but something was happening every week."  A short time later Jerry, too, caught sight of their hairy visitor at the bedroom window, cementing his growing belief that something odd was afoot. "God knows how long this thing had been looking into our window," he says.  "I woke up one night and looked at the window and I saw this thing – it was like a silhouette of a human head, with a messed-up lump of hair and a nose like a human’s – not like an ape with pushed-back nostrils.  "It had these massive bloody shoulders, like a gridiron player wearing shoulder pads. I was convinced then. I wasn’t exactly a sceptic before, but this convinced me completely."  As the frequency of the sightings increased, the couple began to have bizarre dreams about the creature, often waking to catch sight of a hairy face peering through the window.  "I noticed we started having these nightmares. I would wake up and say to Sue, 'I’ve just had this frightening dream of a yowie,’ and she would say: 'Really? So have I’."  Footprints were also found on the couple’s property after some of these visitations, which Jerry photographed and cast. The couple, who regularly "bush walk", have also spotted strange footprints along the fire trails and tracks that criss-cross the area, leading down into gullies, waterfalls and caves.  Despite these physical traces, they remain convinced the creature is more faerie-like than fierce physical beast.  Aboriginal lore does support the existence of 'little people’ (of a small, hairy variety) in Australia – the yuuri (pronounced 'yawri’, not unlike Yowie) or 'brown jack’, which fulfil a similar role to that of European elves and leprechauns, guarding certain places, granting favours and playing tricks on people.  A Continuing Mystery  While the ongoing experiences of the Frosts, Prices and O’Connors – which we have only touched on very briefly – are confined to the Blue Mountains region, there have been numerous Yowie sightings all over Australia, predominantly along the east coast in mountainous and forested areas.
But despite the prolific number of sightings, the occasional compelling plaster-cast of a footprint and a rich oral tradition that is thought to predate white settlement by millennia, there is as yet no concrete proof that a hitherto unknown species of man-ape walks the Australian continent.  The elusiveness of the creature, if indeed it is a flesh-and-blood being, continues to puzzle and frustrate those who have encountered it, and those like the authors who pursue proof of its existence. It may one day be shown that the paranormal and physical aspects of the mysterious yowie are different sides of the same coin.
In the meantime, failing that, all we can do is flip it and see.