This is one of the most surreal storie we have seen in a long time.At first I thought we were looking at a news mock up site whith a story line straight out of the exfiles.
But its real.!
And they have done a movie based on the event. 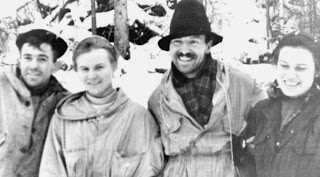 Peering through the windswept snow on a dark February day, the rescue party finally came on the first sign of life — the flapping remains of a tent pitched on ski poles on an uppermost slope of Kholat Syakhl, ‘Mountain of the Dead’ in the native language of northern Siberia.
But where were the nine young Russian students who should have been sheltering beneath the canvas?
Curiosity turned to mystery as human tracks were seen in the snow heading downhill away from the tent in single file for a third of a mile... barefoot human tracks.
n temperatures of minus 24! And mystery became horror when an inspection of the tent showed its front flaps still buttoned tightly together but huge knife slashes down the sides — through which the occupants apparently fled.
Inside was like the Mary Celeste, with everything intact — warm clothes, waterproof jackets, blankets and sweaters that would have been essential to survive in the Siberian weather; plus cameras, diaries and cooking utensils, all apparently abandoned in a moment of madness.

So began the story of what became known as the Dyatlov Pass Incident, one that has baffled the world for more than half a century since whatever horrific tragedy overtook the nine in February 1959.
They had been missing for almost a month after trekking out into the bleak wildness of the Ural mountains — seven men and two women, all of them fit, hardy and experienced hikers on what was supposed to be a short and invigorating break from their graduate studies...and more...source
Newer Post Older Post Home