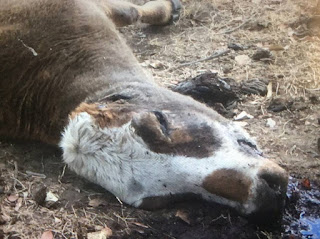 MUTILATED beasts with udders, ears and tongues cut out have been found on a north Queensland cattle property, and the owners are convinced it was not the work of humans.
Mick and Judy Cook from Cloverly Station, north-west of Mackay, recently found a dead cow with its udder, an ear and its tongue cut out and said the cuts were so clean, they believe only a high-tech robot or aliens could be responsible.
Mrs Cook said five mutilated beasts had been found on their property in the past few months.
“In the last three months we’ve lost 10 head and five of them are definitely in odd circumstances,” Mrs Cook said.
“About three weeks ago my husband was putting lick out down the bottom near Broken River and he noticed a cow dead.
“He noticed the udder was gone.
“We first thought a dog, but then saw one ear was taken off and a circle around it’s muzzle where the tongue was taken out.
“It’s definitely not a person, whether it’s a sophisticated robot or aliens, we just don’t know.”
Mrs Cook said there was no way anyone could have accessed the cow in the river country without them knowing.
“It’s an hour’s drive from here and no one is getting down there without driving right by the house.
“There was absolutely no tracks, no blood, nothing. It’s amazing to think there was no blood, there is no way of cutting anything off with a knife as clean.
“The thing is, nothing went in and ate it, the dogs or the pigs, nothing really wants to take them.”
Mrs Cook said a week ago another steer died. When Mick went back to tow the beast a few days later, it had not been touched by dogs but there were strange markings.
“We have seen one dead steer closer to home, with a closer look later he had mutilations too.
“At first there were no markings, it had its tongue removed, its ball bag taken out and pissle pulled back completely out, and it's bottom taken out too.”

Mrs Cook said at the beginning of June they had put their weaners in a paddock on their own. After hearing noises in the night, the next morning they found the weaners had broken through fences to flee.
“They were obviously frightened and we were blaming a dingo, but a week or so later we discovered a cow dead not far from where it all happened, with all of the markings.”
The Cooks run a 1100 Brahman-cross herd on their 14,600km property, which is about 15km from the Eungalla Dam.
The bought Cloverly in 1989 and have lived there since the end of 1997.
The latest deaths follow a similar happening 10 years ago, when two other dead and desecrated beats were found.
“About 10 years ago up in the top country we found one with its udder cut out.
“A few days later our kids found another one in a different paddock to what it should have been, with no broken fences and its udder was completely off.”
Mrs Cook said her daughter had researched the phenomenon and found there was cases of cattle being inexplicably mutilated from around the world.
She said a veterinarian investigating cases in the US had said even vets could not make such clean cuts using their surgical skills and equipment.
“Whether its highly sophisticated robots, or aliens, it’s definitely not the work of humans.
“We didn’t think much of it in the beginning, and 90 per cent of people probably wouldn't notice either, they’d just think another one is dead.” 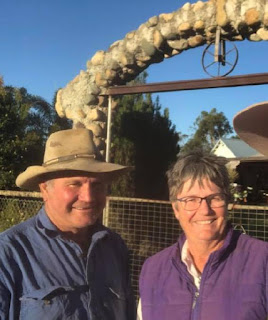