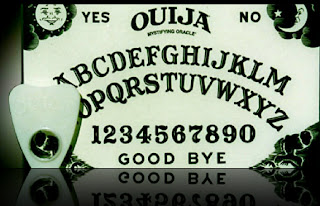 The Honour Roll
Shelley and a group of friends had gone away for the weekend to Bega and had opted to stay in a small bed and breakfast on the highway, quaintly decorated with period pictures and furniture.
After a day of driving around sampling the district’s well-known cheeses and dropping by the lookout, the girls retired back to the B&B to enjoy a baked dinner with some recently purchased wine.
Lingering over dessert several of the girls expressed their boredom, as the night was still young, but being a little too far from "town" they could not venture out anywhere.
One of the girls, Erica, tentatively suggested they make an ouija board, a popular parlour game reputedly used to contact the spirits, as a fun diversion for the evening.
While most of the girls were enthusiastic, a couple declined to join in as they had heard through "friends of friends" about some terrifying incidents involving ouija boards.
Undeterred the girls set about writing and cutting out letters of the alphabet, the numbers one to ten, the words ‘yes’ and ‘no’ and ‘hello’ and ‘goodbye’.
They carefully laid them out on the table and grabbed an empty glass from the sideboard to use as a planchette. The session got underway.
"Is there anybody there," Shelley asked, eyes shut, concentrating. Nothing happened. Shelley was patient, repeating the question again. The glass moved a fraction, then skated over the wooden tabletop to rest at ‘yes’.
The girls gaped, thrilled with their small success they asked more questions.
"What’s your name?"
The glass inched over to "E", rested, then spelled out "P..A..T..R..I..C..K".
"I don’t get it," Erica murmured. "What is your name?" she repeated.
Nothing happened for a moment, then the glass edged back to "E" then, almost wearily as if explaining to a small child, proceeded to tap out PATRICK again.
At the moment the door burst open and the two girls who had declined to join the session strolled in. The glass whizzed over to "goodbye". Shelley slapped an open palm on the table. "Thanks guys," she grumbled.
The other two took seats guiltily, deciding that, while participating was not for them, they were too curious not to be spectators of this forbidden dalliance with the spirit world.
Once again the group tried, unsuccessfully. They waited for 10 minutes then tried again. "Is there anyone there?" Erica asked. Nothing. "Is..there..anyone..there?" she repeated.
The glass inched forward, slowly gliding to a yes. "What’s your name?"
Once again the glass slowly slid to the letters of the alphabet, picking out "B", "Y", "R" – it seemed to hesitate then stopped. Erica decided to make a guess:" Is your name Byron?"
The glass zipped over to "yes". "What did you do, what was your job," she asked, high and on a roll. Nothing happened. "Were you a farmer?" Nothing. "Soldier?" The glass whizzed over to "yes".
Sarah, one of the spectators squealed. With the concentration broken for the second time all the girls rolled their eyes. It would be useless to continue at this rate. "What?!" demanded Shelley.
"The picture frame in the hall, it has a list of soldiers names from World War II, from around this area – let’s check it out!"
The small group rushed into the hall to check out the list, eagerly scanning it for Byron.
"J.Byron! Look, a J.Byron! Oh, and look, look at this!" Erica yelled. "E.Patrick!"
The girls glanced at each other as an eerie silence filled the hallway. "Enough said," Shelley piped up. The group quietly returned to the kitchen table and collected the paper cuttings and glass, putting the latter in the sink as they disposed of the rest in the bin. The ouija board session was over.
Newer Post Older Post Home